What is a weir diaphragm valve? 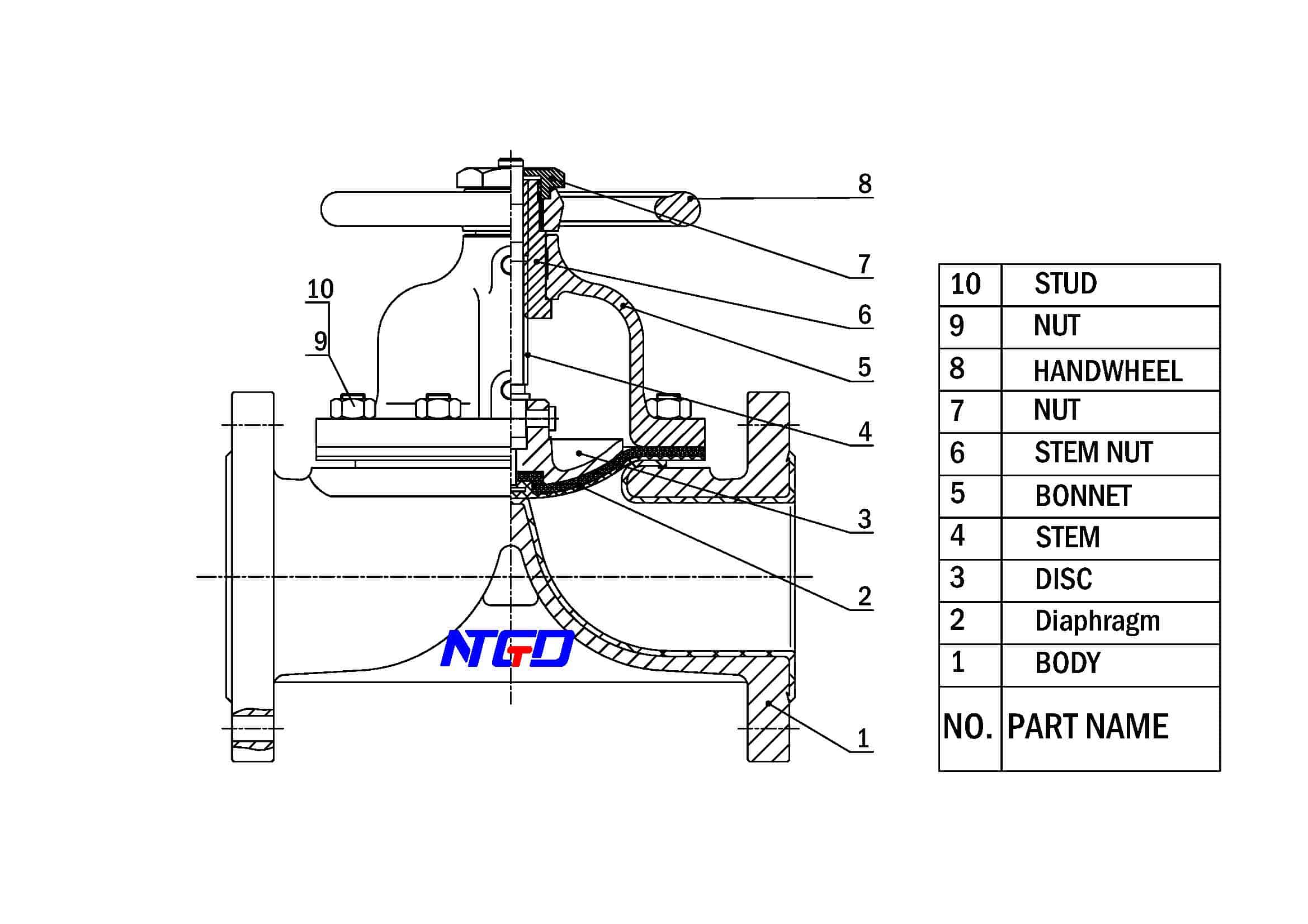 These diaphragms valves can be classified based on the actuator used and application of that. Considering the actuators the types of weir type diaphragm pumps are:

These are weir type diaphragm valves with a crank or handwheel used to apply torque. The applied torque is used to rotate the stem and thus move linearly to alter fluid flow. These type of weir type diaphragm valves have a slow control speed. They also need more manual energy to operate. Some gearheads can be installed in these valves to improve the torque and thus increase closing or opening speed. Despite these valves being manual, they can also have other important features such as position indication, stroke adjustment, and switches for electrical feedback to enhance convenient operation. 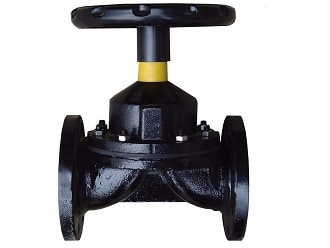 These are weir type diaphragm valves that have electrical actuators. These valves use an electric motor to modify the flow rate of the fluid. The motor is connected to a gear train to lower the motor speed and increase its torque. By using an electrical actuator these valves can be operated reversibly that is close to the diaphragm and vice versa. 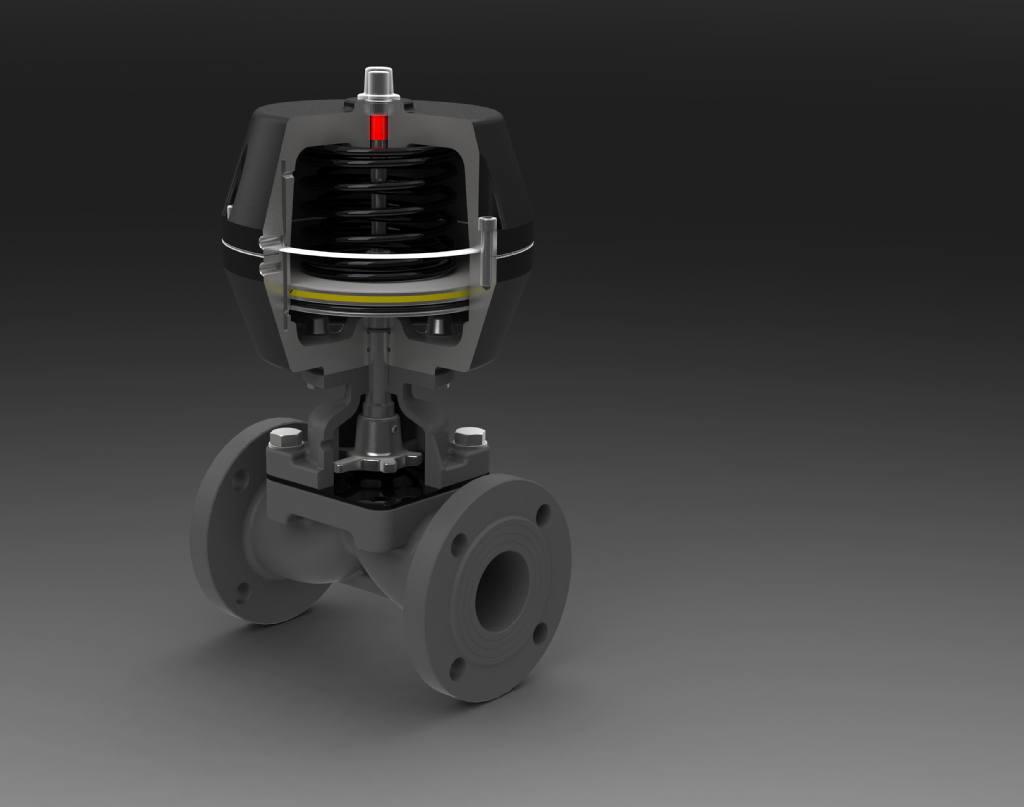 These are weir type diaphragm valves that use hydraulic fluid like water or oil to close or open valves by exerting large force on the diaphragm. These valves are often used in lower-speed applications.

These are valves that use change in temperature to close or open valves to alter the fluid flow.

PTFE is a synthetic fluoropolymer. This material has superb chemical and corrosion resistance suitable for handling strong alkalis, acids, and solvents. It is a stiff material which makes it create a large force to operate a valve. A diaphragm made of this material can operate between -184 oC to 1649 oC. PTE material is made strong by reinforcing it with glass fiber which improves its compressive strength, abrasion, and wears resistance as well as pressure rating.

This is a synthetic rubber material often used to make diaphragms. It is known for good abrasion and corrosion resistance. This material can handle fluids with entrained oils, alkalis, acids, explosives, petroleum, and fertilizers. A diaphragm for weir type diaphragm valve made of this material can work in temperatures between -28 oC to 93 oC.

This material has low gas and vapor permeability. This makes it suitable for use in gaseous media. Butyl rubber can be used in alkalis and acids and steam sterilization. Diaphragms made of this material can operate between -20 oC and 120 oC.

This material is resistant to abrasion and has high strength. This material can handle gases, fats, fuels, alcohols, oils, and petroleum. However, it is not compatible with ketones, ozone, acetones, and other modified hydrocarbons. Diaphragms made of this material can be used in temperatures between -25 oC and 57 oC.

This material can handle alkalis and acids and is abrasion-resistant. Diaphragms made of natural rubber are often used in dilute mineral acids, abrasives, and brewing. Such diaphragms can work in temperatures of -40 oC and 57 oC.

The bonnet and valve body are made of strong and rigid materials that can protect components of the weir type diaphragm valve. Manufacturing the bonnet from less corrosion-resistant material will be fine because the bonnet will be protected from the wetted part of the valve. Smooth lining the inner diameter of the weir type diaphragm valve will help in preventing gumming and clogging of viscous and sticky fluids. Similar to the diaphragm, the valve body needs to be made of a material that is resistant to corrosion and which can offer sterilization. To enhance a certain degree of sanitary, antimicrobial materials such as bronze and brass can be used. Some commonly used valve body materials for weir type diaphragm valves are cast iron, stainless steel, cast steel, bronze, brass, PVC, ductile iron, CPVC, and U-PVC.

This is the measure of the valve’s ability to allow fluid to flow through it. It is described as the volume of fluid at 316 oC that can flow through a valve in one minute with a 1 psi pressure drop across the valve. Knowing the valve flow coefficient is very important because it helps to determine the size of the weir type diaphragm valve that can allow fluid at the appropriate flow rate. Increasing the stem travel and valve opening increases the valve flow coefficient.

This is the drop in pressure from the inlet to the discharge of the valve. When the ratio of pressure drop across the weir type diaphragm valve to the whole system pressure drop is very small, then the flow rate difference would also be very small up to a point when the valve is fully closed. As such, a quick opening or fast-acting weir type diaphragm valve will be of great help.

This consideration is important for weir type diaphragm valves meant for throttling purposes. The needed volume expected to pass through the valve needs to be determined and it is affected by inlet and outlet pressure and temperature, flow rate, fluid viscosity, and specific gravity. When such properties are determined, then the valve pressure drop and capacity of the weir-type diaphragm valve will be determined. There are various methods used to determine the size of the valve. One of the methods is by use of pipe geometry factor.

No flow or not enough flow

Leakage between counter flange and body

Not able to achieve full opening or closing position

Leakage in the seat when the valve is closed

Weir type diaphragm valve performs well in controlling fluid flow and throttling processes. This valve is often used to control the flow of homogenous and clean fluids as well as gases to avoid the accumulation of viscous sludge and contamination on the saddle. Weir type diaphragm valves can be in radioactive, hazardous, abrasive, and corrosive fluids. Because of the strength of these valves and their ability to work on hazardous and corrosive fluids they are used in many industries such as pharmaceuticals, vacuum service, chemical processing, beverages processing, de-mineralized water, corrosive fluids such as acids and alkalis, and in power generation among others.