What is a thermostatic steam trap?

How does a thermostatic steam trap work?

A thermostatic steam trap can operate using balanced pressure bellows. In this case, the trap starts working by first pushing air and condensate ahead of the steam via the trap. The thermostatic element is wholly contracted and at the same time, the valve is kept open to a point when steam approaches the trap. When the temperature in the thermostatic steam trap increases, it immediately heats the charged element which then increases the inside vapor pressure. As the pressure in the element is balanced to the trap body system pressure, the element expands and it closes the valve. When the inside temperature of the trap reduces for few degrees lower than the saturated steam temperature, the element bellows is contracted by the imbalanced pressure which opens the valve.

The other method of operation of a thermostatic steam trap is that of a balanced pressure wafer operation. This method is similar to that of the balanced pressure bellows. The wafer is partly filled up with a liquid. When the temperature in the trap increases it heats the charged wafer and thus increases the inside vapor pressure. As the pressure in the wafer becomes more than the surrounding steam pressure, the membrane of the wafer is pushed on the seat of the valve closing the valve. Drop-in temperature emanating from condensate or non-condensable gas cools and lowers the wafer inside pressure which allows the wafer to unveil the seat.

Liquid expansion thermostatic steam trap has a fixed temperature discharge feature, this trap can be used as a shutdown drain thermostatic trap. In this case, the outlet always points upwards as shown in the figure below. This helps to enhance the continuous immersion of the element with oil. Since this trap can discharge at temperatures between 60 oC to 100 oC it can only open normally during start-up. The liquid expansion thermostatic steam trap installation can be done alongside the mains trap which is normally piped to a return line of the condensate.

Illustration of liquid expansion thermostatic steam trap in use

The balanced pressure thermostatic steam trap is an improvement of the liquid expansion thermostatic steam trap. The working temperature of this trap is impacted by the steam pressure of the surrounding. This trap operates by the use of an element which is a capsule with a mixture of water and special liquid with a boiling point lower than that of water. At start-up, cold conditions exist and the capsule is relaxed. This trap has its valve wide open and off its seat. This allows unlimited air removal. This feature is of an all-balanced pressure steam trap and it accounts for why these traps are suitable for air venting. 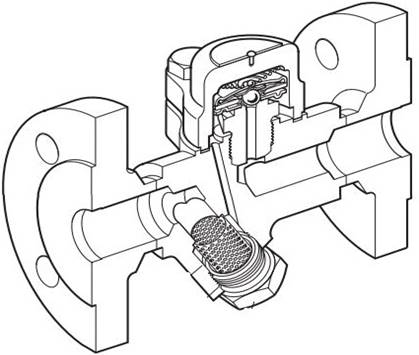 When condensate flows through this trap, heat is transmitted to the liquid contained in the capsule. The liquid then vaporizes before the steam reaches the trap. The capsule vapor pressure makes it expand and which then makes the valve shut. Heat lost from the balanced thermostatic steam trap cools the water that is surrounding this capsule while vapor condenses causing the capsule to condense. This makes the valve open and releases condensate till when steam starts again and the cycle begins afresh.

This is a type of thermostatic steam trap made by the use of two strips of different metals that are welded together to form one element. This element can deflect if heated as shown in the figure below.

The simple element used in this type of trap considers two main factors that are:

A steam trap performance can be determined by checking its response on a steam saturation curve. A suitable response is one closely following the curve and exactly below it. A basic bimetal element will react to changes in temperature in a linear manner. As shown in the figure below, some bimetallic thermostatic steam traps use two different bimetallic leaves in one stack that operates at different temperatures.

A better bimetallic thermostatic steam trap employs the thermostatic element of a disk spring. The element consists of bimetal disks. If the disks act directly between the valve seat and the valve stem, they cause the condensate discharge temperature to change linearly as the pressure changes. When a spring washer is incorporated between a seat recess and disks it helps to absorb some of the expansion from the bimetal at low pressure. This helps to enhance a greater change in temperature as the pressure changes. The shape of the spring washer is preferred relative to coil spring because it can develop force exponentially which increases the rate compared to the linear rate. Such effect can take place for around 1.5 mega Pascal till the spring deflects to the bottom of the recess. This makes it possible for the condensate discharge temperature to follow the saturation curve of the steam more accurately. The rate of discharge can also be improved by the use of dynamic clack that tends to create a bang discharge.

Advantages and disadvantages of each type of thermostatic steam trap

Thermostatic steam traps are manufactured using various strong and corrosion-resistant materials such as stainless steel, carbon steel, and bronze. These traps are used when handling light condensate loads. Thermostatic steam traps are used in various applications such as radiators, sterilizers, tracer lines, heating coils, evaporators, cooking kettles among others. These steam traps are advantageous in many dimensions such as having high efficiency, easy maintenance, and easier installation, ability to discharge air and other gases which reduces water hammer and can achieve high discharge rate among others.