The characteristics and differences of ball valve and butterfly valve

The characteristics and differences of ball valve and butterfly valve
The valve whose opening and closing member (ball) is driven by the valve stem and rotates around the axis of the ball valve is called a ball valve. It should generally be installed horizontally in the pipeline. It is evolved from the plug valve. 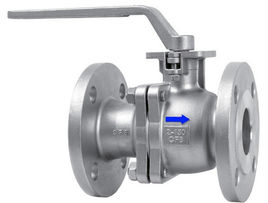 Features:
1. Low flow resistance;
2,Can be opened and closed quickly;

3.Its sealing structure determines its comparative design and corrosiveness;

4.Under higher pressure and higher temperature, complete sealing can be achieved;

5. The valve body is symmetrical, which can effectively withstand pipeline pressure and cope with high pressure conditions;
Butterfly valve is a kind of regulating valve with simple structure. It is also called flap valve. Butterfly valve that can be used for on-off control of low-pressure pipeline medium means that the closing member (disc or butterfly plate) is a disc and rotates around the valve shaft to achieve opening. A valve with closing.

Features:
1,Can be used for large diameter valves;

4. It can be applied to different sealing surfaces and used in various environments, including powdery, granular media, etc.;