Next, I want to share a technical article with you. There are many practical formulas below. Regarding the multi-stage pressure-reducing regulator valve, let’s take a look at it together.Structural characteristics and types of multi-stage pressure-reducing regulating valve:
existControl valveThe root cause of the cavitation phenomenon in the valve is that the pressure difference between the front and back of the valve is too high.It is generally believed that whenΔp>2.5MPaWhen the fluid medium enters the throttling part inside the valve, the pressure drops suddenly, and the pressure drops to a lower level at the small flow cross-sectional area. When this pressure is lower than the saturated vapor pressure of the fluid at the current temperature, part of the liquid will appear. Vaporization forms a large number of tiny bubbles. When the fluid flows through the orifice and the pressure rises, these bubbles will burst and return to the liquid state, which will impact the valve body and valve core and cause noise, vibration and other hazards. In recent years, some control valve manufacturers at home and abroad have developed various types of anti-cavitation multi-stage pressure-reducing control valves specially used in harsh working conditions.CommonMulti-stage pressure-reducing regulating valveDivided into cascade regulating valve, multi-layer sleeve regulating valve,Labyrinth regulating valvealthough they are different in structure, they have a common working principle, which is to reduce the total pressure difference in stages by changing the structure, so that the pressure drop of each stage Δp1It is less than the critical pressure difference for cavitation, thus effectively avoiding the occurrence of cavitation and other hazards. 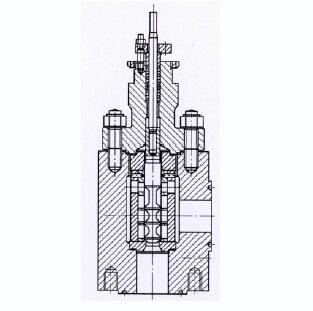 The cascade regulating valve is mostly used in the occasion of working with liquid medium, and its characteristics are as follows:

1)The continuous pressure difference can be reduced during the opening and closing process, and the action of each level of throttle is lagging behind that of the previous level of throttle, which can reduce the continuous high pressure acting on the valve port during the opening and closing process, sharing the first Stage orifice pressure.

2)The flow resistance is small, and it can be used in occasions where the fluid cleanliness is not high, or even solid-liquid two-phase flow.

3)The cascaded spool is generally hardened by tungsten carbide spraying, which has good erosion and cavitation resistance.

5)The cascade regulating valve generally has a limited number of step-down stages, mostly3~4level, and cannot be used in occasions where the differential pressure is too high.

The multi-layer sleeve type multi-stage step-down structure is shown in the figure2As shown, it is often used in power stations or chemical industries.

The typical structural feature of the multi-layer sleeve type control valve is that the throttling part of the valve core is composed of several layers of sleeves with small holes, and there is a certain gap between each layer of sleeves, so that the fluid can be buffered when flowing through the sleeves. , so as to control the fluid velocity within a certain range. 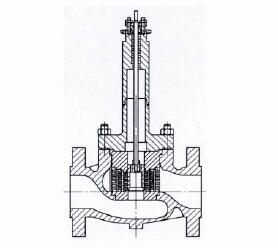 1)The number of pressure-reducing stages of the multi-stage sleeve-type regulating valve can be designed to be larger, and the pressure-reducing capacity is stronger than that of the cascade type, and it can be used for the occasion of high pressure difference.

2)The multi-layer sleeve structure can not only meet the higher pressure drop requirements, but also ensure a larger flow rate during work.

3)The anti-cavitation performance is good. When it is used in liquid medium, the fluid flows from the outer sleeve to the inner side. The liquid medium is depressurized step by step in the sleeve to reduce the occurrence of cavitation and cavitation, and the fluid finally flows from the inner sleeve. The small hole on the sleeve is sprayed to the center valve cavity area, so that the bubbles will burst in the center of the sleeve, and will not directly damage the metal surface of the valve.

4)It has good anti-noise and vibration performance. When it is used for gas medium, it flows from the inner side of the sleeve to the outside. Compared with the inner side, the aperture and gap of the outer sleeve are enlarged, so that the gas medium continues to expand during the step-by-step depressurization process. It can effectively reduce the harm caused by noise and vibration.

5)The sleeve processing process is more complicated and the cost is higher. But it is easy to install and maintain, and easy to replace.

The labyrinth disc multi-stage pressure-reducing structure is shown in the figure3As shown in the figure, the core throttling part is made up of multiple metal discs with labyrinth grooves. The fluid flows through the labyrinth flow channel through multiple collisions and turns, consuming energy, and the flow rate is also controlled during the step-by-step depressurization process. 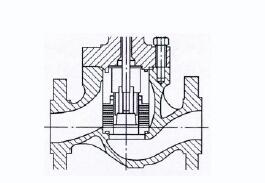 Generally, it is mostly used in special occasions of high temperature and high pressure drop in nuclear energy, power station and other industries. The working medium is mostly superheated steam, and it can also be used in liquid medium. Its characteristics are as follows.

4)Labyrinth discs require high manufacturing precision, and are generally surfacing with Stellite alloy, which has a long service life;Installation and maintenance are relatively simple, and the disk is easy to replace.

Flow Coefficient(CV)It is generally used to indicate the flow capacity of the valve. In order to select a suitable regulating valve, the necessary flow rate must be calculated according to the conditions of use.cvvalue, and then select the appropriate regulating valve model according to the rated flow coefficient. In the compressible condition, the pressure of the fluid decreases during the throttling process, the volume expands, and the density decreases. The flow situation in the valve is much more complicated than that of the incompressible.Therefore, for multi-stage pressure-reducing regulating valves that are generally used in compressible working conditions, the calculation method of the flow coefficient is also relatively special.cvThere are two commonly used methods for calculating the value, the compression coefficient method and the expansion coefficient method.

In the formula gammaN——Gas gravity under standard conditions, unit iskgf/m3(1kgf=9.8N);

compression factorε can be determined by experiment, generally for air experiment:

In addition to the compression coefficient method, there were also methods such as the pre-valve density method, the post-valve density method, and the average density method in the early days. Early formulas can only be applied to occasions where the degree of pressure recovery is not high, and better calculation accuracy can be guaranteed in the non-critical flow range.However, due to the simplification of the calculation model by the formula, with∆p/p1When it is increased to the critical pressure difference ratio, a large error will occur, and the requirements cannot be met in the transition zone and critical zone.

Since the calculation formula itself does not contain the actual density of the fluid at the upstream condition, the expansion coefficient method introduces the compressibility factorZTo compensate for the deviation between the actual gas and the ideal gas under certain conditions.Coefficient of expansionYUsed to correct for changes in gas density from the valve inlet to the throat,Yand the ratio of the area at the throat to the inlet area, the shape of the channel, and the pressure difference ratioxReynolds number and specific heat ratio coefficientFKand other factors.The expansion coefficient method has comprehensively considered many factors affecting the flow of compressible fluid, so it can ensure high calculation accuracy in the entire flow range, and is suitable for various types ofvalveis widely used.
After reading the above article, do you now have a deep understanding of the structural characteristics and types of multi-stage step-down regulating valves? And the above formula, get it up~