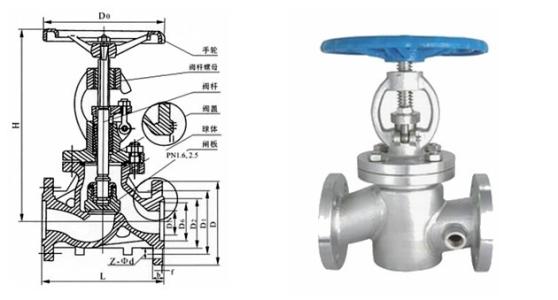 one,DC globe valve: In the DC or Y-shaped globe valve, the flow channel of the valve body forms a diagonal line with the main channel, so that the degree of damage to the flow state is smaller than that of the conventional globe valve, so the flow through the instrumentvalveThe pressure loss is also correspondingly small.
two,Angle globe valve: In the angle globe valve, the fluid only needs to change direction once, so that the pressure drop through this instrument valve is smaller than that of the conventional structure globe valve.
three,Plunger globe valve: This form of globe valve is a variation of the conventional globe valve. In this instrument valve, the disc and seat are usually designed based on the plunger principle. The valve disc is polished so that the plunger is connected with the valve stem, and the sealing is realized by two elastic sealing rings sleeved on the plunger. The two elastomeric seals are separated by a collar and compress the seal around the plunger by the load applied to the bonnet by the bonnet nut. The elastomeric seals are replaceable and can be made of a variety of materials. The instrument valve is mainly used for “open” or “closed”, but is available with a special form of plunger or a special collar and can also be used for adjustment flow.

All of the above is what I will share with you today aboutThe selection of globe valve and three common classifications, please forward it if it is helpful to you~