1. The sealing ring of the flange hard sealing butterfly valve seat is composed of multi-layer stainless steel sheets on both sides of the soft T-shaped sealing ring.

2. The sealing surface of the valve plate and the valve seat is an inclined conical structure, and the temperature and corrosion resistant alloy materials are surfacing on the inclined conical surface of the valve plate; the spring fixed between the adjustment ring pressure plates and the adjustment bolts on the pressure plate are assembled together. This structure effectively compensates the tolerance zone between the shaft sleeve and the valve body and the elastic deformation of the valve stem under the medium pressure, and solves the sealing problem of the valve during the two-way exchange of medium conveying.

3. The sealing ring is composed of multi-layer stainless steel sheets on both sides of the soft T-shaped, which has the dual advantages of metal hard sealing and soft sealing, and has zero leakage sealing performance under low temperature and high temperature conditions. 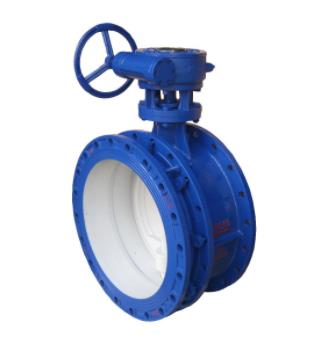 1. Small size, light weight, easy to disassemble, assemble and maintain, and can be installed in any position.

2. The structure is simple and compact, the working torque is small, and the 90° rotation is fast.

3. The flow characteristics tend to be straight, and the adjustment performance is good.

4. The connection between the butterfly plate and the valve stem adopts a pinless structure.

5. The outer circle of the butterfly plate adopts a spherical shape, which improves the sealing performance, prolongs the service life of the valve, and maintains zero leakage of more than 50,000 times under pressure.

6. The seal can be replaced, and the seal is reliable for bidirectional sealing.

7. The butterfly plate can be sprayed according to user requirements, such as nylon or PTFE.

8. The valve can be designed for flange connection and clamping connection.