How the instrument valve works

How the instrument valve works
Instrument valves are also called analog instrument valves.It belongs to a kind of pipeline accessories, used forControl the flow of conveying mediuma device that changes the passage section and the flow direction of the medium, using an analog signal regulator. 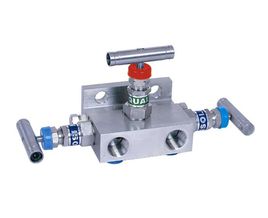 1. The self-operated instrument valve drives the regulating valve with the energy of the adjusted medium itself or after simple conversion to realize automatic adjustment. Float-type liquid level regulators (such as those used in toilets) use the buoyancy of the float on the liquid surface to actuate the regulating valve. This kind of regulator does not require external energy and is an on-site adjustment device. It has a simple structure, is easy to maintain, and is suitable for a single-parameter adjustment system that does not require high control accuracy. It is very similar to pneumatic actuators in principle and structure, and is often classified as an actuator.

2 base type instrument valve An indication recording instrument with an additional adjustment mechanism. It accepts the signal sent by the detection element, and drives the adjustment mechanism to send out the control signal by the action of the instruction and recording mechanism, and sends it to the actuator to realize automatic adjustment. Moving coil indicating regulators, electric and pneumatic recording instruments with electric or pneumatic regulators are all of this type, and they are widely used to control a single production facility. Simple instrument valve is a kind of regulating instrument with strong special purpose and simple structure without indicating mechanism, which can directly receive the signal of detection element. It can also accept signals from transmitters. Non-indicating regulators and temperature alarms are simple adjustment instruments and are widely used in small and medium-sized enterprises.
The 3-unit combination instrument is a set of adjustment instruments composed of several standard units with independent functions. It fully adapts to the requirements of large-scale units and process control, and can realize complex control of multiple loops (see electric unit combination instrument, pneumatic unit combination instrument).
4. The assembled integrated control device is referred to as the assembled instrument. It is a special control device composed of various independent functional components according to the requirements of a large unit or process control. It can be assembled according to the user’s needs, so it has great flexibility.
The above has introduced the relevant content of the instrument valve and the working principle of the instrument valve in detail, hoping to help you.