The Globe valve is used to cut off the flow of the medium and is suitable for occasions that need to be throttled frequently. The most commonly used is in chemical production.

2. Construction of a Globe valve and Working Principles

3. Performance and Application of Globe Valve

4. Installation and use of globe valve

A. Based on bore pattern 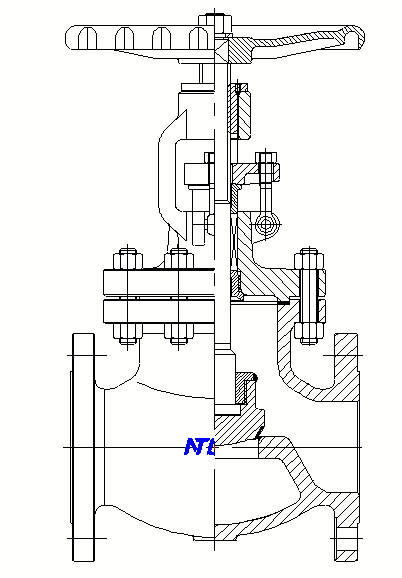 The medium inlet and outlet flow path of the T Pattern Globe valve are 180° in the same direction. This design has low coefficient of flow and pressure drop. It relies on the valve stem to navigate the valve disc towards the sealing surface of the valve seat, fully shut off the flow. During the open/close process, the friction between the sealing surfaces is small, minimizing wear and tear. The degree of throttling height is minimum and the process performance is optimum. Compared to gate valve, the structure of the globe valve is straight forward, and it is easier to maintain. It is the most commonly used valve in the industry. 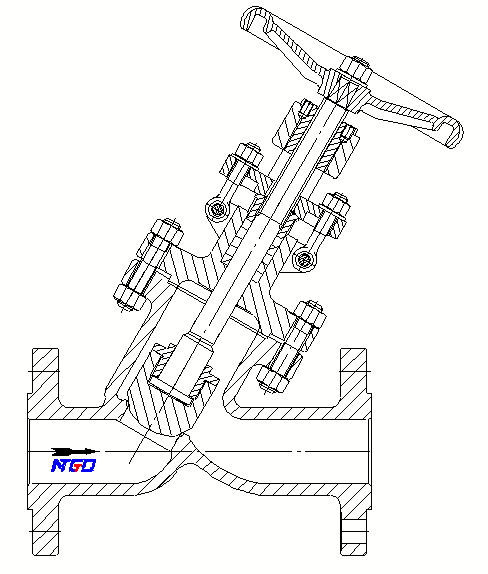 The valve stem and the flow path of the Y type globe valve form a certain angle, and the sealing surface of the valve seat and the inlet and outlet flow path also have a certain angle. The valve body can be made integral or split body. The split body type Y globe valve uses two valve bodies to sandwich the valve seat between them, which is convenient for maintenance. Y type globe valve will not change the direction of flow. It is the smallest flow resistance among globe valve. The sealing surface of the valve seat and disc can be welded with hard alloy for erosion and corrosion resistance. It is very suitable for alumina production pipelines, and is also suitable for pipelines with slurry medium. 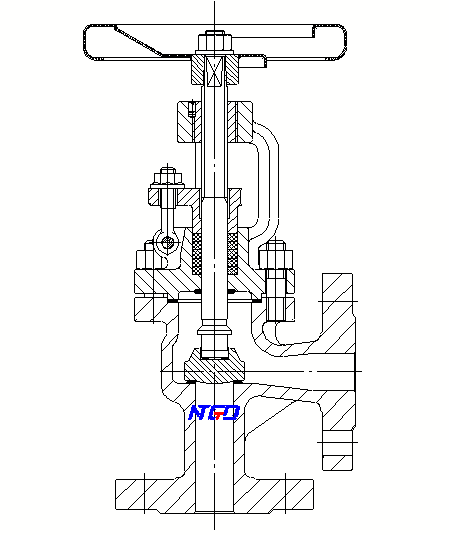 The biggest advantage of the angle globe valve is that the valve can be installed at the right angle of the pipeline system, which saves 90° elbows and is easy to operate. Therefore, this type of valve is most suitable for use in synthetic ammonia production systems and refrigeration systems in chemical fertilizer plants.

B. Other Globe Valve Types

Bellow globe valve is also called bellow seal globe valve. It is designed by automatic roll welding to form a metal barrier between the fluid medium and the atmosphere to ensure zero leakage of the valve stem. The bellows globe valve uses a bellows structure, and the lower end of the stainless-steel bellows is welded to the valve stem to prevent the process fluid from corroding the valve stem. The other end of bellow is installed between the valve body and bonnet to form a static seal. Double seal design is adopted. If the bellows fails, the stem packing will act as secondary seal. The bellows are welded to the stem to maintain stable operation performance, to avoid stem vibration caused by valve plug vibration. It is suitable for media which require vacuum circumstance such as steam, flammable, explosive, thermal oil, high purity, toxic and atc 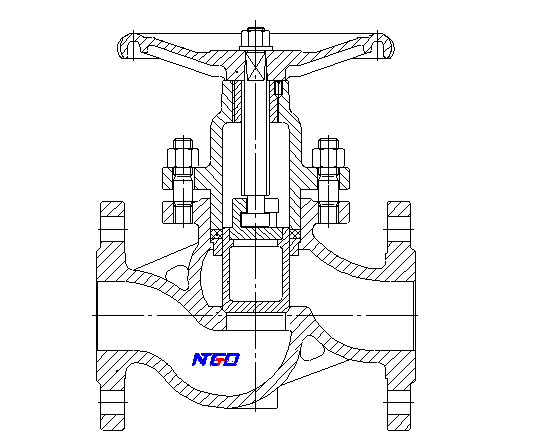 This type of plunger valve is a radial seal, which is realized by two spring loaded sealing rings sleeved on the polished plunger. The two spring loaded seal rings are separated by a collar, and the load applied to the bonnet through the connecting bolts of the valve body and the bonnet presses the spring-loaded seal ring around the plunger firmly to ensure the tight sealing. The valve material combination is carbon steel for the body, Cr13 stainless steel for the plunger, and flexible graphite for the sealing ring, which can be used for water, steam, oil pipelines; if the body and the plunger is made of stainless acid-resistant steel, with PTFE seal ring, it is suitable for acid and alkali corrosive medium.

The advantages of plunger globe valve are reliable sealing, long life span and easy maintenance. The disadvantage is the slow open/close speed. This type of valve is widely used in urban construction systems, water and steam pipelines in urban heating system. 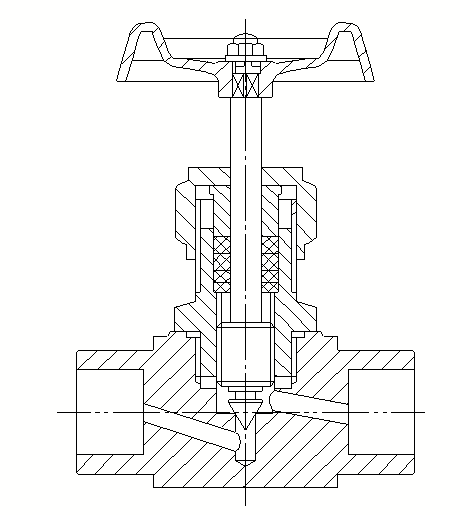 The needle type globe valve is used for precise flow control. The valve disc and stem are usually integrated. It has a high precision needle-shaped probe matched with valve seat. Moreover, the thread pitch of the stem thread of the needle-type globe valve is smaller than that of the stem thread of the general globe valve. Under normal circumstances, the needle globe valve’s seat hole size is smaller than the pipe size. Therefore, it is usually limited to use in pipelines with a small nominal diameter, mainly used as sampling valves. 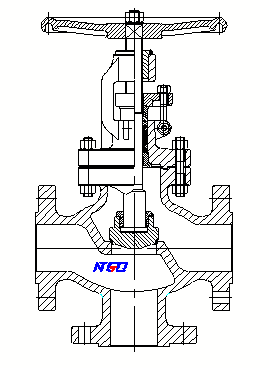 2. Construction of a Globe valve and Working Principles

The globe valve is constructed of valve body, valve disc/plug, bonnet, stem, etc. The opening and closing parts of the globe valve are plug-shaped disc, the sealing surface is either flat or tapered, and the disc move linearly along the center line of the fluid. The stem operation type includes lift type (the valve stem is turned up and down by hand wheel with handwheel remained at its location), and the rotating and lifting stem type (the hand wheel and the valve rod rotate and move up/down together, the lock nut is positioned on the valve body)

The globe valve is only suitable for fully open and fully closed operation, and it is not suitable for regulating and throttling. The globe valve is a force-sealed valve, when the valve is closed, pressure must be applied to the disc/plug to established tight sealing. When the medium enters the valve from below the valve disc, the resistance that the operating force needs to overcome is the friction of the valve stem and packing and the force generated by the pressure of the medium. When the force to close the valve is greater than the force to open the valve, the diameter of the stem should be increased to avoid stem from distort and bend.

3. Performance and Application of Globe Valve

A. Advantages of Globe Valve

B. Disadvantages of Globe Valve

Globe valves are often used in pipelines that need to be fully opened and closed, and steam pipelines are more commonly used. The connection between the globe valve and the pipeline can be weld type or flange type

4. Installation and use of globe valve

A. The valve is passing.

B. The valve is not functioning/ cannot be opened or closed.

It is mainly caused by the loss of filler of packing or damage to the structure of the filler foil. Therefore, you should pay attention to the following issues during operation:

The globe valve is mainly used to cut off the pipeline flows. Compared to gate valve, globe valve regulating performance is better, opening height is small, closing time is short, manufacturing and maintenance are easy. The sealing surface is not easy to wear and scratch, sealing performance is good, and the service life span is long. The valve body structure design of the globe valve is more complicated, therefore, the flow resistance is large and the energy consumption is large; it is suitable for media such as steam and oil products, and it is not suitable for media with large viscosity, particles, coking and precipitation. Medium and high pressure globe valves and large-diameter globe valves can be used as a balanced structure. The extended product of the globe valve is choke valve, by controlling the pressure and flow of the medium with changing the of the flow path. Except the opening and closing parts is streamlined cone type, the rest are same as globe valve.

LUCKY6S Valve is a professional globe valve manufacturer, feel free to contact us if you have any inquiry