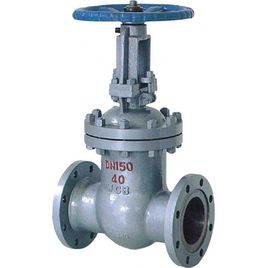 1. Types of gate valves
1. According to the structure of the gate, it can be divided into
1) Parallel gate valve: the sealing surface is parallel to the vertical center line, that is, the gate valve with two sealing surfaces parallel to each other.
In the parallel gate valve, the structure with thrust wedge is more common, that is, there is a double-sided thrust wedge in the middle of the two gates. This gate valve is suitable for low pressure, medium and small diameter (DN40-300mm) gate valves. There is also a spring between the two gates, the spring can generate a pre-tightening force, which is beneficial to the sealing of the gate.
2) Wedge gate valve: The sealing surface is at a certain angle to the vertical center line, that is, the two sealing surfaces form a wedge-shaped gate valve.
The inclination angle of the sealing surface is generally 2°52°, 3°30°, 5°, 8°, 10°, etc. The size of the angle mainly depends on the temperature of the medium. Generally, the higher the working temperature, the larger the angle should be to reduce the possibility of wedging when the temperature changes.
In the wedge gate valve, there are single gate, double gate and elastic gate. Single disc wedge gate valve has simple structure and reliable use, but it has high requirements on the accuracy of the sealing surface angle, difficult processing and maintenance, and the possibility of wedging is very high when the temperature changes. Double disc wedge gate valves are widely used in water and steam medium pipelines. Its advantages are: the accuracy of the angle of the sealing surface is relatively low, the temperature change is not easy to cause wedging, and when the sealing surface is worn, gaskets can be added to compensate. However, there are many structural parts in this kind of structure, which are easy to bond in viscous media and affect the sealing. More importantly, the upper and lower baffles are prone to rust after long-term use, and the gates are easy to fall off. Elastic gate wedge gate valve, which has the advantages of simple structure and reliable use, can produce a small amount of elastic deformation to compensate for the deviation produced in the process of sealing surface angle processing and improve manufacturability. It has been widely used use.
2. According to the structure of the valve stem, the gate valve can be divided into
1) Rising stem gate valve: The stem nut is on the bonnet or bracket, and when the gate is opened and closed, the stem nut is rotated to realize the lifting of the stem. This structure is beneficial to the lubrication of the valve stem, and the degree of opening and closing is obvious, so it is widely used.
2) Dark stem gate valve: The stem nut is in the valve body and is in direct contact with the medium. When opening and closing the gate, it is realized by rotating the valve stem. The advantage of this structure is that the height of the gate valve remains unchanged, so the installation space is small, and it is suitable for gate valves with large diameter or limited installation space. This structure should be equipped with opening and closing indicators to indicate the degree of opening and closing. The disadvantage of this structure is: not only can the stem thread not be lubricated, but it is directly eroded by the medium and is easily damaged.
Second, the diameter of the gate valve shrinks
If the channel diameters in a valve body are not the same (often the diameter at the valve seat is smaller than the diameter at the flange connection), it is called diameter shrinkage.
The shrinkage of the diameter can reduce the size of the parts, and the force required for opening and closing can be reduced accordingly, and the application range of the parts can be expanded at the same time. But after the path shrinks. Fluid resistance loss increases.
Under certain working conditions in certain sectors (such as oil pipelines in the petroleum sector), valves with reduced diameter are not allowed. On the one hand, this is to reduce the resistance loss of the pipeline, and on the other hand, it is to avoid obstacles to the mechanical cleaning pipeline after the diameter shrinks.
3. Advantages of gate valve
1. Small fluid resistance.
2. The external force required for opening and closing is small.
3. The flow direction of the medium is not restricted.
4. When fully open, the sealing surface is less eroded by the working medium than the globe valve.
5. The body shape is relatively simple, and the casting process is good.
4. Disadvantages of gate valve
1. The overall size and opening height are large. Large space is required for installation.
2. During the opening and closing process, there is relative friction between the sealing surfaces, which is easy to cause scratches.
3. Gate valves generally have two sealing surfaces, which add some difficulties to processing, grinding and maintenance.